23 May An American Question 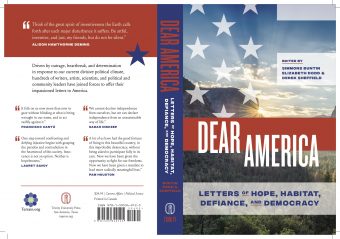 From Dear America: Letters of Hope, Habitat, Defiance, and Democracy

An old and perhaps unanswerable question has troubled me since childhood. Now it won’t let me rest.

The Revolutionary War had entered its final years, still undecided, when J. Hector St. John de Crèvecoeur asked, What then is the American, this new man? Most of the soon-to-be former colonists would probably agree with his response, published in 1782 in Letters from an American Farmer. “He is either an European, or the descendant of an European, . . . who leaving behind him all his ancient prejudices and manners, receives new ones from the new mode of life he has embraced, the new government he obeys, and the new rank he holds.” He makes “a new race of men, whose labours and posterity will one day cause great changes in the world.”

So many others were excluded from this definition: women, Indigenous peoples, as well as one-fifth the population of the fledging United States “whose labours” had driven the economies of all thirteen colonies. Slavery and its profits—whether from tobacco, cotton, sugar, or rice—buttressed the new republic. National prosperity would continue to depend on exploiting cheap labor and exploiting land once dispossessed of its original inhabitants. Part and parcel of this “new mode of life” were adaptive prejudices: concepts of race, whiteness, and white supremacy. The social and political community imagined as the new nation by the founding property-holders had to be carefully guarded.

Although recent assaults on this country’s civil society might seem unprecedented, de Crèvecoeur’s question has always been contested ground.

Any expanding membership in the imagined community of “we the people” was answered time and again by tightened boundaries. Radical Reconstruction, for instance, defined and broadened the reach of U.S. citizenship with the Civil Rights Act of 1866 and the Fourteenth and Fifteenth constitutional amendments. Those (men) once enslaved could now, in principle, enjoy equal protection under the law without regard to race. They could own land. They could run for office. They could vote . . . until the surge toward justice fell with the compromised presidential election of 1876.

A retrenching racial hierarchy promised white redemption, and not only in the South. It would take the 1964 Civil Rights Act to make into law again what had been gutted when Reconstruction was abandoned. And the era of Jim Crow would also see immigration quotas. In the spring of 1882, Congress passed the Chinese Exclusion Act, the first major federal law restricting immigration. That statute (with its extensions) would stand in force for six decades in the name of racial purity.

As a child I stumbled over “with liberty and justice for all,” wondering if there was an elastic limit to realized citizenship while my schoolmates recited the Pledge of Allegiance. These six words seemed at odds with the ceaseless media images. TV news alone brought into our home each night footage of war, assassinations, and protests by people who looked like me. I came of age doubting claims of incremental progress yet still wanting to believe in expanding tolerance if not equality.

But I wasn’t so naïve as to believe the nation had entered a post-racial, post-racist age with Barack Obama’s presidency. Not when white-supremacist and hate groups have proliferated in the last decade. Not when an opportunistic presidential campaign in 2016 could exalt ignorance, suspicion, and fear to feed racism, xenophobia, and misogyny—and win. Not when many white voters, of all economic classes, perceived that campaign’s promise to be redemption.

In the age of Trump the clock has turned back yet again on civil rights. The rule of power and profit reigns supreme. White nativists vilify Muslim, Mexican, and other “nonwhite” immigrants as alien. A nuclear arms race and other military threats escalate. Environmental regulations and protected lands fall prey to oil and gas plunder or mining. Climate science and language are censored despite global changes more rapid than predicted. Perceptions of race cut sharper, more divisive lines.

Taking back the country to “make America great again” can mean many things. One, of course, is the monochromatic need of whiteness to believe this nation is what it never was, except in the minds and rhetoric of those longing for it to be so. Their public memory requires amnesia and selective erasure of different peoples and cultures long part of the American experience.

It is tempting, here, to exhort. To warn, to urge, to insist: We must . . . We should . . . We need to . . . But changing any situation for the better requires knowing what it really is. And key to this, I believe, is comprehending how forms of othering have always been central to the democratic project that is the United States. The seeming paradox between an American creed of liberty and justice for all and the realities of an American promise denied to members of marginalized groups is, instead, a malignant symbiosis.

Transgression in word and deed—the root meaning of outrage—has occurred each day in the polarizing age of Trump. One step toward confronting and defying injustice begins with grasping the paradox and contradiction in the heartwood of this society.

Innocence is not an option. Neither is hopelessness.

The first documented arrival of Africans in the English colonies on mainland North America took place in August 1619. Four hundred years later I don’t know if we the people can acknowledge, with honesty, our intercultural past-to-present and thus admit many varied responses to “Who is an American?” I had hoped, though, that more than half a century after the assassination of Dr. Martin Luther King, Jr., this nation might see itself more clearly.

If you are interested you can order this book through Trinity Press, or from any of these Black-owned Bookstores still doing their work even during these times of overlapping pandemics. 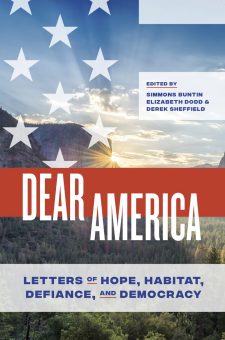