On April 6, 1949, a young “Negro” published his first novel to great fanfare. It dealt with racial hatred and the decision of an embittered “mulatto” boy-becoming-a-man to “pass” or not in segregated America. This young man was my father, Willard Wilson Savoy. 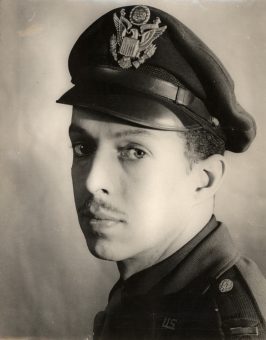 Published by E.P. Dutton more than a decade before my birth, Alien Land was unknown to me until after my father’s death when I was a teenager. I stumbled upon the book late one night in the basement stacks of my university library. It was the end of my “freshman” year there.

My father and I had spoken little before his death from lung cancer. To me there seemed little to say, as if silence itself could metastasize between a man who expected much, and was often disappointed, and his only child who thought his only words to her were “Think!” and “Use your brain.”

The dedication alone in Alien Land convinced me of a chance for dialogue after death: “To the child which my wife and I may someday have—and to the children of each American—in the fervent hope that at least one shall be brought to see more clearly the enduring need for simple humanity.”  Some of my own future writing projects will continue this conversation, and tell more of his story. And mine.

Here are some of the reviews of his “first”–and what turned out to be his last–published book:

An angry work, this first novel deals with…the spiritual torment of the all-but-white Negro who can “pass” with ease, and the deeper torment he faces when he moves into the all-white world. Mr. Savoy, a young public relations specialist in Washington, writes with understanding of this impasse…the hate that flames on both sides of his grimly drawn color-line is both real and terrifying.
—C. V. Terry, The New York Times (April 3, 1949) 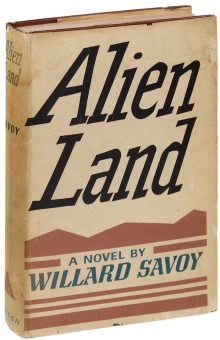 “Alien Land,” by Willard Savoy . . . is written with passion and with anger, so that it has a vitality which makes it linger in the mind. Reduced to its simplest terms it is the story of a man’s loss of the sense of personal dignity, a loss that began in his childhood, continued through his adolescence, and into manhood; and of how he struggled to regain it.
—Ann Petry, The Saturday Review (April 30, 1949)

Willard Savoy in Alien Land…[shows] with clarity the problems confronting Negroes at all social and economic levels. Almost every shade and variety of insult, humiliation, and even of physical violence, from the subtle slights of the North to the outright emasculation of the race in the South is here painted always in vivid and sometimes hideous colors . . . . Alien Land is frankly a protest novel effective in its candid and forceful presentation of the many-sided and highly contradictory aspects of interracial contacts.
—Arthur E. Burke, The Crisis (April 1949)

With the generous help of Robert Stepto, Richard Yarborough (editor of the Northeastern Library of Black Literature), and John Elder, I was able to find a publisher to reprint Alien Land in 2006.

If you are interested in my father’s book, please see https://www.dartmouth.edu/~upne/series/NLBL.html