African Americans in the Anti-Slavery Movement & a Family Trace

Posted at 15:58h in Thoughts, Writing by Lauret Savoy 0 Comments
0 Likes
Share
Yesterday I attended a truly wonderful and thought-provoking book launch and panel at UMass re: Manisha Sinha‘s new THE SLAVE’S CAUSE: A HISTORY OF ABOLITION. Her encyclopedic volume presents the African American role in defining and shaping the abolition movement(s) in this land from the earliest days on—not just in the 19th century.
Her work also relates to my last note on my great-grandfather Edward Augustine Savoy, to my new writing project, and to the difficulty of tracing a familial past.
Edward Augustine’s parents, Edward L. and Elizabeth Butler Savoy, appear in the 1850 and 1860 federal censuses in Washington City as free mulattoes. The 1860 Federal Census lists my great-great-grandfather as a “laborer” and my great-great-grandmother Elizabeth a “washerwoman.”
Only by chance did I learn that she was part of the local anti-slavery community. A single sentence left a trace in a 1969 research article on the “free Negro population” of Washington: “Elizabeth Savoy, wife of Edward Savoy, a successful caterer, worked with the underground railway and helped slaves make their way northward to Canada and freedom.” One sentence in an article with no noted source. The author, long dead, apparently left no research files. Yet twenty-five words revealed more about the kind of woman my great-great-grandmother was than “washerwoman” on a census ever could. Her husband made a “successful” living at a time when most respectable jobs were closed to free men of color.
The last chapter in TRACE (“Placing Washington, D.C., after the Inauguration”) introduces this paternal line as I begin to search for origins, not just of blood but of the deliberate siting of the nation’s capital along the Potomac River and the economic motives of slavery.
My new writing project, “On the River’s Back,” continues this search for generational landscapes and familial ties to the tidewater and Piedmont landscapes of Maryland and Virginia (and DC) from the colonial era to the Civil War. The land itself is and will be a big part of the story.
Manisha Sinha’s new work lifts the veil and gives voice to so many who had been lost in history’s silences. I hope I can honor paternal ancestors by giving voice to the traces left of their lives in this land. I hope you’ll wish me luck!
The first of the two maps shows what would become part of the nation’s capital: tobacco plantations, farms, tidal marshes, and port towns on the Maryland side of the Potomac River in 1792. The other map, from 1793, shows the plan of the City of Washington. Both maps are from the Library of Congress. 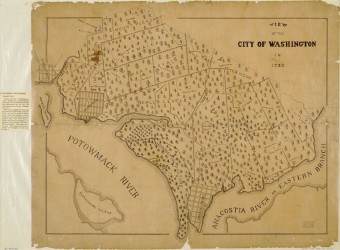 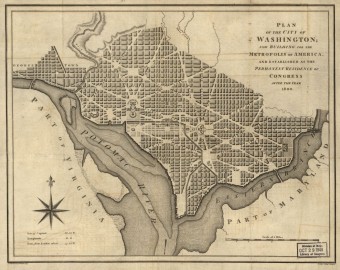