Escaping Invisibility in the Nation’s Capital

At a dear friend’s suggestion they included my great grandfather, Edward Augustine Savoy, who worked for 21 secretaries of state under 14 presidencies. He was man whom FDR had chauffeured to the White House for congratulations on his retirement at the age of 77, after one secretary of state had waived federal law and another, Henry Stimson, subverted it to keep him past the mandatory retirement age. A man whose life and contributions are little known today, yet whose story reveals the troubling ties between African Americans and the nation’s capital.

Edward Augustine Savoy was born a free person of color in Washington City, as the nation’s capital once was called, in 1855. His father was a leading caterer and public waiter to federal officials. His mother aided the Underground Railroad. After the Civil War both parents worked for Secretary of State Hamilton Fish, who hired a 14-year-old Edward Augustine as a page in 1869. Thus began a career that would span 64 years.

E. A. Savoy was privy to the paper trails of rifts and wars between nations. He witnessed the assassination of President James Garfield. He delivered ultimata and passports to diplomats, becoming known as the State Department’s international “bouncer.” In two such instances he tricked successive Spanish ministers at the outbreak of the Spanish-American War into accepting their own passports—so they could then be asked to leave the country. He carried home the treaty from Paris that ended that war, witnessing and sealing other treaties. He kept ambassadors of warring nations apart when their visits to the State Department coincided.

When finally retired in 1933, he held one of the highest government positions possible for an African American at the time, chief messenger to the secretary of state. Less than a year after his death in 1943, a Liberty ship would be launched in his honor, the SS Edward A. Savoy.

Barely five feet tall, known for his tact, charm and wit, E. A. Savoy was considered an anomaly. On meeting him for the first time, according to a newspaper account from the day, one Congressman confided, “I thought he was at least the Ambassador from Dahomey, and was quite taken back when he volunteered to take my card to the Secretary.”

Often chosen as the subject of human-interest stories, he appeared no less than six times in TIME magazine, which liked to record “Savoy-isms”: “When I meet a man who is domineering to his inferiors, I know he is sycophantic to his superiors, and no gentleman.” Or, on the language of successful diplomacy, “Never say what you want to say, and never say anything before you think twice.” The New York Times gave his obituary a full column and photo.

Yet my great grandfather never received the status, respect, or salary of the skilled diplomat he was. To government officials and the media he was “Eddie,” the “colored” messenger or “diminutive Negro” doorkeeper, rarely Edward, certainly not Edward Augustine. The boundary defined by ideas of “race” stood firm, cutting his story, and that of his family, which grew out of the paradox of Washington, D.C. 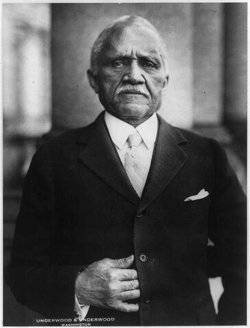 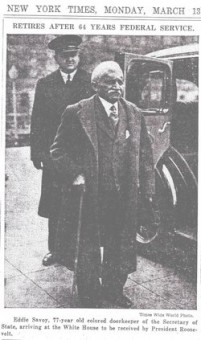